Today was a fun day (for me at least) at Westwood.

A few weeks ago, when I learned that Bro. Steve's message today would be about hell, I immediately started combing through my list of hell related worship songs. 2 seconds later, when I realized that list didn't exist, I decided to do a general worship setlist instead.

Then last Sunday, I learned that both our pianist and bass player wouldn't be at our church today. (Just to be clear, they were not out together. I know this is how rumors get started.) Our keyboardist could fill in on piano or bass but would be really tested if I asked him to play both simultaneously. So I chose to go a completely different route.

Our worship services typically include an approximately 30 voice choir, 5 person vocal praise team, 5 person praise band, and 4 person horn/wind section. But today, I gave almost all of them the morning off. Instead we had what I referred to as "Westwood unplugged".

Acoustic guitar, percussion, and vocal. That was it. 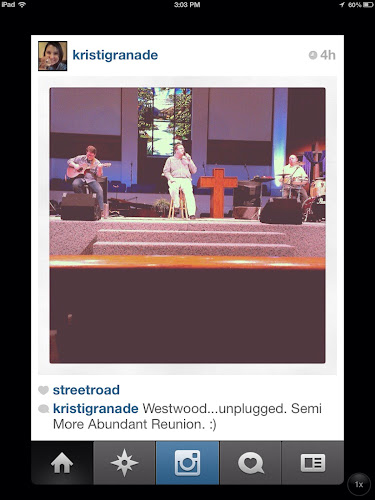 Westwood Unplugged. Photo credit to @kristigranade on Instagram.
You can follow her on instagram to learn how much she loves her husband and "I Love Lucy".
This pic is of Joseph Kinnaird on guitar, me on vocals, and Matt Wiginton on drums.

Here's what we did today:

Hallelujah (Your Love Is Amazing)

In The Sweet By & By - I'd never led this old Southern hymn before, but I knew it from my own childhood. I think I'd stayed away from it previously because I typically steer clear of songs that focus on Heaven. But since the message was on our afterlife, it seemed appropriate. A bonus was that it was a ton of fun to sing and it really seemed to engage the congregation too.

Come Thou Fount Of Every Blessing -The response from the congregation on this hymn and the next song was awesome. Talking with Joseph about it tonight, it was great to hear that he heard what I did. The congregation was singing out so loudly, that he backed off on guitar just a bit so the voices coud be heard even more.

How Great Is Our God w/ How Great Thou Art

Special: Listen To Our Hearts - Did a semi jazzy version of this old Steven Curtis Chapman & Geoff Moore (and the distance) classic.

In The Sweet By & By

Overall our Sunday went well. People were still talking about it tonight. I think they enjoyed the sound and the song choices. But I know for sure they enjoyed that it was something different than normal.

How was your Sunday?

You can see what other churches did in their worship services today at theworshipcommunity.

When I was writing about my encounter with Baywatch, I found a blog entry that I had never finished in July. It may be 4 months old, but I figure it's still worth sharing...

Here are 7 things overheard on the Stinson July beach vacation.

My Encounter With Baywatch

Hello? Is anyone there?
This blog has been quiet for so long, I wasn't sure if you'd be here.
But I'm glad you are. 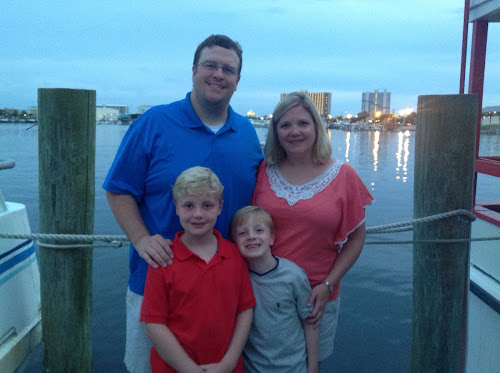 I'm at the beach with my family and in-laws. Yesterday I had an experience that just had to be documented.
When you have kids, a beach vacation is not always relaxing. While my choice might have been to sleep in, the boys want to hit the beach early. So we're typically in the water before 9am. Yesterday was typical.
The water was calm. The boys were entertaining themselves. So I said to everyone "I'm going to swim out to the sandbar." The only problem with that is that I knew the sandbar was deeper than I could touch, so they'd have to let me know when I got there (into the lighter green area in the water.) I devised a genius plan. When I thought I was there, I would turn back to shore raise my arms into the air, palms up, shrugging my shoulders, as if to ask "well?" They would reply by either giving me a thumbs up or waving me on to swim out further. It was clearly a perfect plan.
So off I went. I wasn't in a hurry. I was just enjoying a leisurely swim in the deeper water. I turned from time to time, raised my arms, and received the sign from shore to keep going. When I finally did get the sign that I had gone far enough, I decided to just have some fun. I was wearing goggles (If Jaws was going to eat me, I wanted to see him coming.) so I would dive under from time to time to look for sand dollars. I swam to the bottom and from the pressure in my ears could tell it was very deep. Wanting to know how deep, I surfaced, raised my hands into the air, then went under trying touch bottom with my feet. I knew from my toes to my raised hands would be about 8 feet. I estimate the water was about 15' deep, I could neither touch bottom, nor feel my hand out sticking out of the surface. 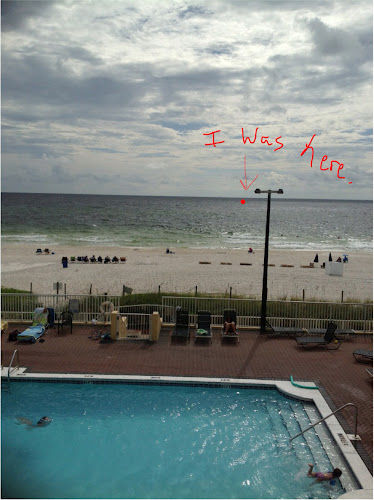 After bobbing around out there for a while, I decided to head back in. I'll admit, after swimming so long, I was getting a little tired, so I started back stroking some, swimming underwater some, basically just freestyle swimming and enjoying myself. At one point I even wondered if I could get more bang for my buck with each stroke if I held my hat in my hand so that it would cover more space and therefore move more water. (Did I mention I was wearing a red baseball cap?
Ok, so picture that:
I had it going on.

That's when I saw the guy on the jet ski.
Now, my first thought was " Oh crap! He's coming right at me. I'm about to get hit by a guy on a jet ski." So I started swimming with bigger strokes, to make sure to be seen. I quickly figured out that he definitely did see me and was slowing as if to speak to me.
David Hasslehoff like dude: "Hey man. Are you ok?"
Me: "Yeah, I'm great."
Hasslehoff: "You sure? Someone called and reported someone struggling in the water."
......Me struggling? Nah. How could anyone think that?
Images from the past 30 minutes flashed in my mind:
I assured him that I was ok and continued swimming toward shore.
His response was to back away about 30 feet, put on his life vest, and watch me until I was walking in the sand.

Clearly, he believed me.