Today is Thursday August 4th.
I am just now sitting to blog about my 4th day of vacation which actually was 11 days ago.
I guess this series has gone on long enough, so today I am finally wrapping up these tales by combining some of the highlights of our last few days...

﻿ ﻿ 1.) The Boat (first attempt)
Day 4 we went to Shipwreck Island water park (in spite of my tailbone injury.)
If you've never been to a water park, just imagine an amusement park with a lot more sunscreen and a lot less clothing. Our day started in line for a boat ride. The basic idea is that you walk up a bunch of stairs, then get in a big inflatable boat with up to 3 friends and ride together down a waterslide while laughing all the way.  At first, both boys were excited about riding, but then as we got higher up the stairs, Gavin decided he wasn't interested anymore. Unfortunately, he backed out and Kristi had to take him  back down in tears. Poor guy.

2.) Name Tags
After that, Ethan and I rode down and then tried to find Kristi and Gavin again.
While we were looking for them, I heard a very memorable speech from a father to his 4yr old daughter.
Apparently she had gotten out of his sight and he very loudly gave her this speech....
"Do you know what a pedophile looks like?!? Well, neither do I! Pedohiles don't wear name tags!!!"
Did I mention she's 4?
"That fence is not very high! It's the perfect height for someone to jump over, grab you up, jump back over, and throw you in a trunk so I'll never see you again!!"
At this point I heard this little girl say something that sounded like "squeak, squeak, squeak." That's what little crying girls sound like sometimes. I'm not sure exactly what she said but her dad responded even louder than before with..."I don't care if you were with your cousin Madison right over there!! I didn't know where you were and I'm the one that matters!"
At this point I'd heard enough and walked off imagining the trouble that this little girl is going to get into in her teens as she rebels from anything her father wants her to do.

3.) A little freaked out
We finally found Kristi and Gavin and our splashing and sliding continued all day. At another point we got separated again and while we were apart Gavin decided he was ready to ride that boat ride he'd attempted earlier in the day. So Kristi and Gavin rode and he loved it. When I saw him again he was so excited. He wanted me to ride it with him. We began the climb up the stairs talking and laughing. As we got closer to the top, he got quiet. He was looking down towards the ground. Apparently, Gavin is afraid of heights. That's why he'd backed out the first time. He looked up at me and with that sweet little voice said "Daddy, this is where I get a wittle fweaked out." I had a sudden urge to laugh at that phrase and to take care of my son. I picked him up quickly and pointed his attention to the top of the stairs and how close we were to riding. Once his focus was shifted, he was fine. But I'll never forget him saying that phrase to me.
It was a great day.

4.) And...
As with any trip, there is a phrase that managed to creep up over and over and brought laughs almost every time. Our running joke this trip was the word "And". Apparently "And" is a perfect way to start the song  "O Holy Night".

You see, repeatedly, my sons wanted to hear the song "O Holy Night." They recently discovered Eric Cartman's version from South Park on my iPhone. I'm not sure where I got this MP3 from, but I have to admit, I make sure to play it at least once every Christmas just for a laugh. We listened to it so much, all I have to do now is say "And..." in my best Cartman voice and the boys will jump in with their best impression of Cartman singing. I know this isn't the best thing in the world to expose my boys to. (I make sure to edit out the inappropriate word towards the end.) but you gotta admit, this is pretty funny.

Our trip was full of fun and laughs. These have been just a few of our fun stories. There's no way you've enjoyed them as much as we did. 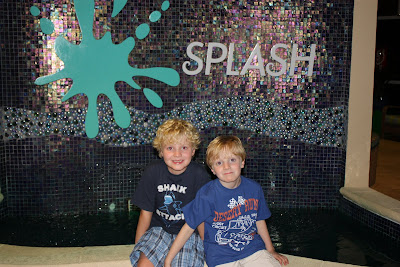