TV Tuesday - This Is Us

I know. I know.
Some off you saw the title of this post and are already calling to have my man card revoked.
I refuse to give it up and will fight you if you think this show is girly.

This Is Us is the best TV drama that has been on TV in years. If you don't believe me, you're wrong.
Some people might say it plays with the viewers emotions. To that I say "play away." It does it in all the best ways.

There are lots of things great about This Is Us, but by far the best is Sterling K. Brown, That dude is just so dang likable. I first became aware of this acting giant in The People Vs OJ Simpson. He was great as Christopher Darden. Then when I saw him on This Is Us, I was hooked. I now wish this guy was on every show. He might have even made the movie I watched last night better, if given a chance. 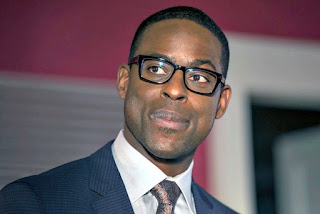 Ok, so he's great, but the writing on the show is too. I find myself connected to the different story lines in so many different ways. Of course, I understand some of their daddy issues due to the fact that my father passed away in 2011. So anytime there is father drama, I'm pulled right in.

I hope this show continues on for many years and then after that they spin off Sterling's character to his own show called "This Is Me."

In the meantime, I completely agree with something I heard Chris Hardwick say on a talk show recently. He really needs to do a "This Is Us" after show called "That Was Them."


(I know I said I'd watch TV for 2 hours. I did, but we'll have to talk about Lethal Weapon later. It's. so good and so not, but that's a conversation for another day. )

Movie Monday - Why Him?

Ok, so here's the deal. There are not enough hours in the day to see/read/enjoy all the good entertainment content that is available today. I enjoy movies, tv, video games, podcasts, and VERY rarely, a good book. So I had a bright idea.

I'm generally a late night guy. I rarely go to bed before midnight, so I thought I might try something crazy. I'm going to try to more carefully choose how I entertain myself and when. So here's the plan I came up with.

From 9pm-11pm on most nights I will attempt to tackle a different form of entertainment.

Monday nights becomes Movie Mondays
Tuesdays are TV Tuesdays
Wednesdays are church night, so I guess I get a break from all this.
Thursdays are for video gaming. I am taking suggestions for a better title for this than "Gaming Thursday." That's pretty lame.
Fridays are Fiction Fridays. I plan to actually read some of the books I've bought over the years that are taking up space around here.

I chose an awful movie to start with. 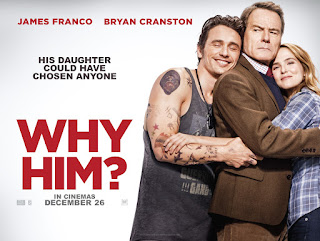 Last weekend, DirecTV offered a free weekend of all the movie channels. Like any movie lover, I set my DVR to record a whole buttload (technical term) of movies that I hadn't yet seen.
As it turns out the first one to record was "Why Him?",  an R rated comedy starring James Franco and Bryan Cranston. My one sentence synopsis is this: Dad does not get along with rich loser his daughter is dating.

I'll go ahead and admit, I did not watch the entire movie. Franco's character REALLY liked the F word. While I'm generally not offended by foul language, it was just way too much. Not quite halfway through this movie, I started hitting fast forward, A LOT. It wasn't funny enough to keep watching and the few scenes that were funny were only funny because of shock value. I do feel like I saw enough of it to have an opinion of it. so I'm going to go ahead and offer it now. SKIP IT.

I should probably quickly describe my rating system for movies:
SKIP IT - don't waste your time
WATCH IT - watch it if you can for free on tv or streaming
RENT IT - it's worth spending a few bucks on
BUY IT - Add it to your collection. You'll watch it more than once.


I will admit that Megan Mullally and Keegan Michael Key were very funny in their scenes that I saw, but they were the only bright spots in this film. I expected way more from Breaking Bad's Bryan Cranston, but what I got instead was a movie that  Malcolm in the Middle's Bryan Cranston would have made.

They say that every journey begins with a single step. I think my journey of trying to consume entertainment this way started with a single mis-step.